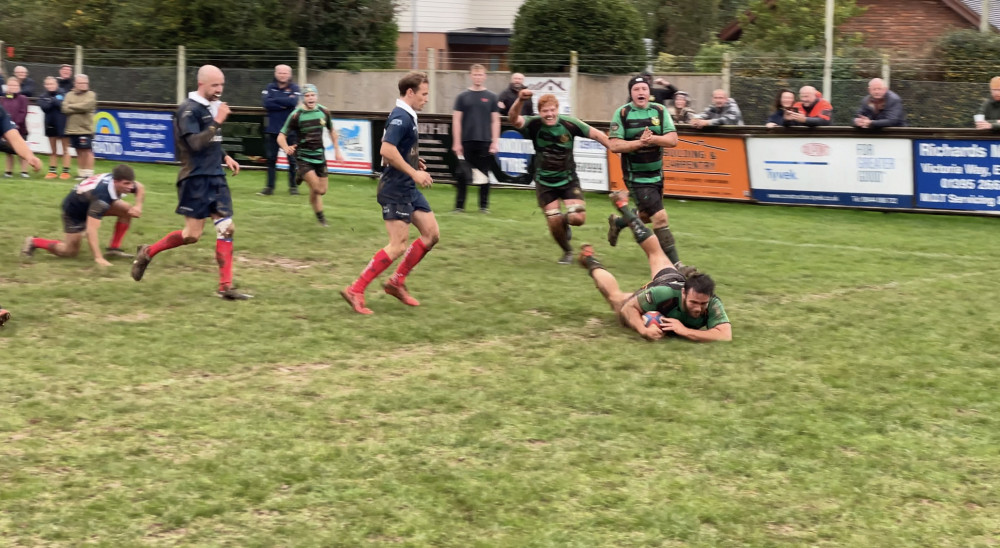 Following a wet morning, conditions on the pitch would prove tricky for both sides. Thankfully the rain had stopped in time for kick off to allow for a more enjoyable environment for watching (and playing) the game.

Withy held the lion's share of the possession in the early exchanges of the game. Unfortunately, with the possession and quick passing came the handling errors thanks to the slippery ball. Using their now trademark forward strength, Withycombe managed to ensure that the restarting scrums were well defended and, on a few occasions came away with the advantage of a scrum penalty against the head.

Whilst in attack, the forwards combined well with the backs to test the Devonport defence as Withy looked to make the gains from within the visitor's half. This defensive line stood strong until a deliberate knock-on from the Devonport Services' Centre saw him sent to the sin bin and an attempt at goal for Harry Symons, which was duly sent between the uprights for three points.

With the opening quarter coming to an end, the second twenty followed in much the same way with some good phases of attacking play from Withy being equally matched with some effective defence from Devonport. Symons doubled his points tally shortly after the first and with the penalty count building against the visitors, a second player was sent to the sin bin for ten minutes just as the first was making their way back to the field.

Still maintaining their one-man advantage, Withy got their first try on the board courtesy of Joe Blyth who dotted the ball down over the line from a well-driven scrum. Symons' conversion added the extra points to give Withy a 13-0 lead after half an hour.

Keeping the play firmly lodged in the Devonport half, Withies earned themselves one more kickable penalty on the stroke of half time to put the home side 16-0 ahead at the break.

With the second half up and running, Withy set up camp back in the Devonport half and with some more pressure from the scrum, the ball passed through the hands of half the team before eventually finding George Doughty who sprinted for the line for Withy's second try.

Now 21 points to the good, Withies continued to test the defensive skills of their Plymouth-based visitors, which, to their credit was working well. It wasn't perfect though as, on the hour mark, Callum Tose exploited a gap in the defence to dart through and score his first senior XV try.

After this third try, Devonport turned on some pressure of their own with a flurry of activity in the Withy half. Thankfully, the defence stood strong and with the loose ball from the visitors, Withies could clear their lines once again. With the lines cleared, defence turned back into attack and with the attack came the bonus point try thanks to an impressive run by Man of the Match Joe Blyth who ran half the field to score his second try of the game.

Keen to still get something out of the game, Devonport made their way back down the pitch and once again started to ask questions of the Withycombe defence – questions that were answered well with some effective defending to keep their lines clear and maintain their clean sheet through to the whistle. The final score Withycombe 31, Devonport Services 0.

A good team performance this weekend with each player doing their bit to make sure of the win. Credit to Devonport too though who continued to compete throughout the entire 80 minutes to play the game in the best spirit, continuing in the clubhouse after the game!

Next weekend, its derby day as we welcome Exmouth II to Raleigh Park in what will guarantee to be an unmissable game! Kick off is at 2:30pm. Ahead of this, the Withy IIs have their first game of the season when they host Topsham III in a friendly at 11:30am.