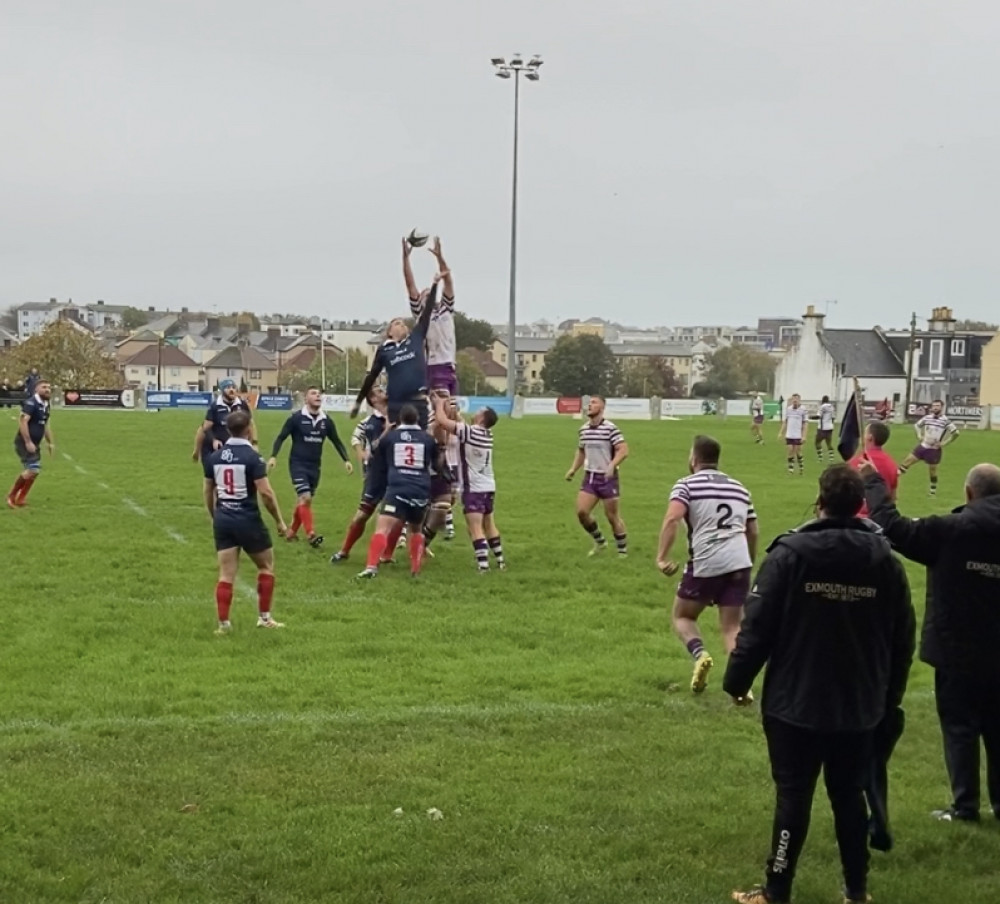 Despite two scorching tries from James Clarke and Nick Headley, The COCKLES will reflect on a missed opportunity for all four league points, eventually losing out 18-15 at Devonport Services.

Well prepared for Services' robust and wide style of play Exmouth did go behind on 7 minutes to a Rhys Williams try and Kieran Down conversion. A real contest for the next twenty minutes, with both teams seeking the edge it was the COCKLES James Clarke who crossed after barrelling his way through the defence, George Meadows extras, 5-7. All this with a man down in the sin bin just before the try. Meadows struck again close to half time with a well taken penalty, 7-10 ahead at the break.

Exmouth forwards had managed the Services driving lineout and scrum time was solid from both sides. Penalties were drawn by each, more as a result of the pressure from both sides. Nick Headley scored next, after a kick chase he outpaced the watching defence, Meadows missed the extras, 7-15. Services Down added a penalty to close the gap, 10-15. Eventually a pressure play handed Greg Thomas a try, conversion missed, score tied at 15-15 on 78 minutes. The COCKLES wanted the win and put together an attacking phase with great handling.  Between the half way line and 22 metre line Exmouth supporters cheered at it appeared Meadow had slotted a drop goal, only for the referee to raise an arm and award a penalty. George stepped up from the same spot and hit the upright. Services cleared their line and kicked the ball deep, it did appear to run in to touch and the game ended. Or not. A quick line out throw was allowed and the COCKLES got caught holding the ball, penalty to services. Kicked. Game over, 18-15 down.

A great team performance, against a top 3 team should have resulted in more than a losing bonus point. Perhaps a review on final moments of game management at training this week. A lot to be proud of for the vocal traveling CLOGS (Cockles League of Old Gentleman Supporters) & hardy Exmouth family and friends.  The boys know they could have sealed this game earlier in the encounter. We move on.

The COCKLES host Drybrook from Gloucester on Saturday 12 November. Kick off @ 2pm.

QUINS came away empty handed from their game with North Tawton 1st Team. Eventually going down 10-31 to the visitors. Tries from Guy Baker & Jake Sharp in consolation. The squad now regroup for perhaps their biggest challenge against Withycombe 1st Team up at Hulham Road on Saturday 12th November. This will be some game with both sides looking to gain an edge before the return outing next year. A long way to travel for both teams in the town.

NOMADS had a week break, up next a tough encounter at home with Exeter Engineers on Saturday 12 November. Kick off at 12pm.