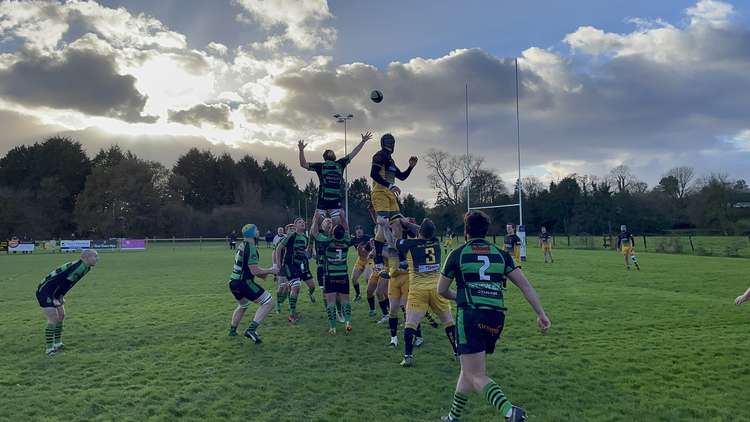 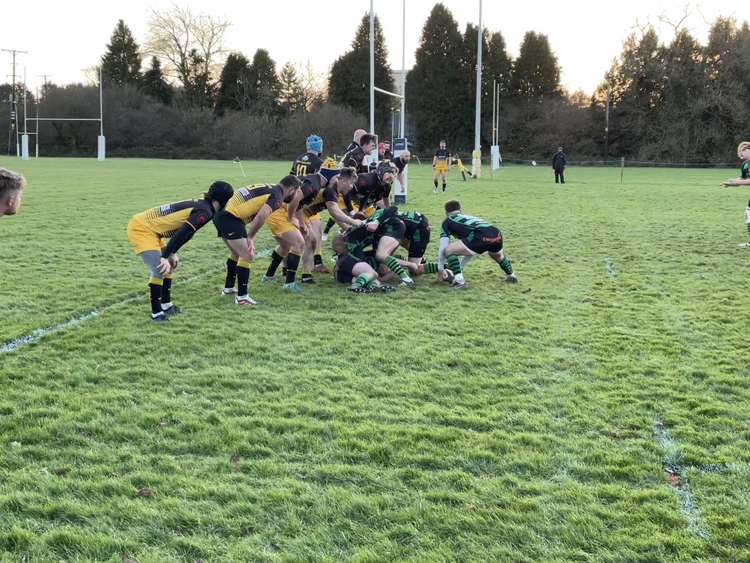 With both Withy and North Tawton going into the game on a level footing on a statistical level with four wins, five loses and a draw apiece, the scene was set for a great rugby battle.

The winds of Storm Arwen and chilly conditions on the pitch would certainly give potential cause for issues, so the boys wanted to keep moving and put on some good pressure from the get-go.

With this game plan being the same for both sides, the early exchanges of the game were fast paced with both sides sharing the possession and territory.

As the opening quarter came to an end, the Withies enjoyed the benefits of some poor North Tawton discipline and ensured they would use the awarded penalties to good use and keep the hosts pinned inside their 22'.

This persistent pressure was rewarded on twenty minutes when a Withy driving maul was taken over the line and scored by Will Hockin and duly converted by the reliable boot of Tom Cooke.

With Withy taking the lead, North Tawton were keen on a speedy response and they began to push forward, but the strong defensive line from the boys continues to improve week on week and, similar to last week, denied any real gains from Tawton as the boys would come together to force the errors from the hosts to clear their lines.

With the half coming to an end and the first bit of real sustained pressure on Withy, North Tawton earned themselves a penalty on the edge of the 22' and, with the help of the wind, Fly Half Ryan Gross' kick dipped down through the posts to close the gap to just 4 points at 3-7.

This gap wasn't to last long though as the first half was brought to a close courtesy of Tom Cooke who took a well angled penalty of his own to give Withy a 3-10 lead at the break.

With the second half underway, the home side now had the slope in their favour, but would be against the wind. This didn't deter them though as they took control of the game, forcing the penalties and slowly gaining the territorial advantage.

Withy continued to fight though, making them work for every yard with their fast reactions at the breakdown. Slowly but surely though, Tawton reached the Withy try line and began knocking at the door, that green and black wall remained impenetrable and forced the knock on, giving the opportunity for the Withies to clear their lines and relieve the pressure – phew!

The next points of the game went our way again when a second penalty kick from Cooke put the boys ten points ahead just before the hour mark. More pressure from the home side followed the penalty as they upped their workload once again, but so did Withy as the big hits kept on coming, slowly pushing the Mid Devon side backwards.

Withy stole the ball back and had a run of their own and began to pressure the home line. The boys thought they had their second thanks to Jack Fear, but as the pile of players left the ground, the ball was shown to have been held up in a great bit of last-ditch defending from the North Tawton forwards. The home side clear with the goal line drop out.

However, there was to be no mistake a couple of minutes later when the Withy forwards upped their strength and walked a scrum under the posts, Number 8 Luke Pattison touched down for his debut try in green and black. The try was converted and the points gap was extended further with the score now 3-20 after 67 minutes.

With the outcome looking more likely, play seemed to settle down but there was still time for one more score; with the wind still in our favour, a strong kick from the withy half bobbled into touch deep in the home 22'. With the new 50:22 rule, Withy were back in attack in a dangerous position and after a few quick phases, Mike Richards crashed over the line next to the posts for the final converted score of the game. The full time result: North Tawton 3, Withycombe 27.

After the game, Withy's Sam Williams reflected on the performance of the side over the past fortnight, saying "There has been some excellent individual performances, the set piece and first phase options have improved but the underlying thing is just how much more cohesive the squad is looking."

A huge shift from each of the 18 players that took to the field today, with good communication and a great work ethic. Nothing should be taken away from our hosts though who extended a warm welcome to us for our first visit to Taw Meadow and put on a great, challenging game of rugby played in great spirit. Overall a great game of rugby to watch and one that kept the feeling of the cold away – even if the hands were numb by the end of the match commentary! Next week, we will hope to continue this momentum when we welcome Veor to Raleigh Park in what should be another cracking game between two closely matched sides. Kick off 2:30pm