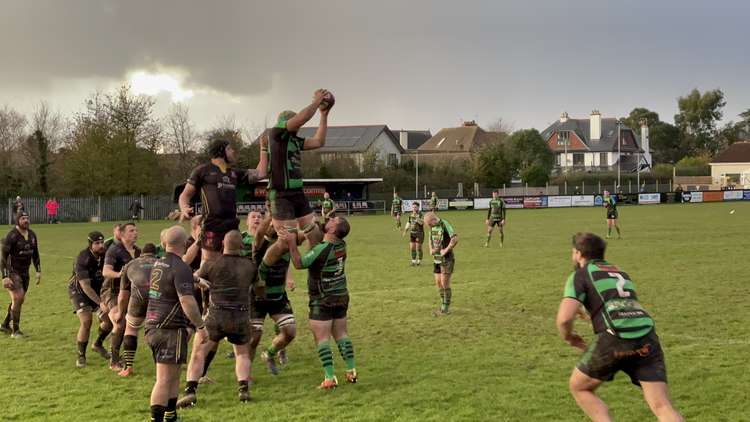 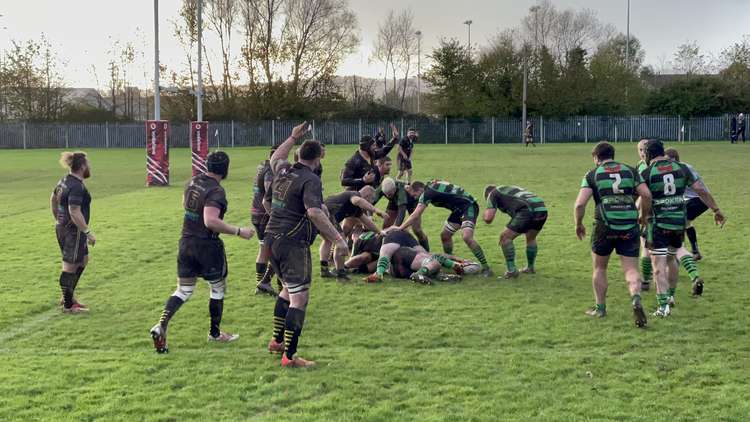 The boys went into this game with two impressive performances under their belt and that a win against Veor would get them a season-best hat-trick of wins.

The initial exchanges of play went the way of the visitors as they used the wind and slope to their advantage and made their way towards the Withy 22'; the now customary tight Withy defence held strong to clear their lines by drawing the penalty.

After 10min, Veor were awarded a penalty just inside the Withy half. The confident fly half took a chance at goal and with pinpoint accuracy and a little help from the wind, the ball sailed through and put the visitors ahead.

With the lead in their hands, Veor grew in confidence and began to control the game in their style with quick recycling of the ball and using the aerial game to keep the Withies pinned in their own half and at one point, confined to their 5m channel.

Veor thought that they'd scored, but once again the defence stood strong to deny the try and hold the ball up off the line allowing Withy to escape the danger zone with a goal line drop out – which was dropped by Veor!

With the ball back in green and black hands it was swiftly shipped out to the quick footed Danny Sansom who turned on the pace to leave the defence standing and run three quarters of the pitch to score. Tom Cooke topped up the points with the conversion and Withies took the lead.

This score strengthened the attacking play from our boys as we began to apply a little pressure of our own and enjoy some time in the visitor's half. Unfortunately despite improving skill in the game, we seemed unable to build any sustained pressure on the Cornishmen who managed to keep the play within the middle third.

As the first half drew to a close, Withy managed to finally get a period of strong attacking play on the 5m line and made the most of it when Tom Cooke grubbered the ball through the defence and into the in-goal area. Cooke managed to skip through the defenders himself and jump on the ball to score in Premiership style.

There was still time for one last attack from Veor too though after the restart with some more quick recycling of the backs but this was to no avail as they were pinged for holding onto the ball deep in the 22'. The quick tap penalty was taken and kicked dead to end the half with the boys 14-3 up.

The second half got underway with some more Veor pressure, causing Withy to put in the big tackles. One of these tackles by Hooker George Doughty was seen as "almost dangerous" and was penalised with a ten minute rest in the sin bin. Despite being a man down in the pack, the front line defence stood strong and kept the persistent Veor attack at bay.

The Withy backs wanted to continue to put their stamp on the game though as they showed they had the upper hand in that area of the game. Another well timed break, this time by Paddy Haddad cleared the way and covered a good amount of ground before passing the ball out to Luke Pattison to run the remaining distance and score in the corner at Brook End; with the conversion attempt drifting just wide, Withies took a 19-3 lead into the final quarter of the game.

Even with a healthy gap in the score – Veor weren't done and they, one again, battled and draw three quick penalties from the Withies to make their way back up the field. Equally as keen to keep the gap, Withy defence remained watertight and forced the knock on from the quickly taken third penalty… the team could breathe a sigh of relief!

With the risk averted, Withy pushed forward once again and began to enjoy some time with the ball in the middle of the pitch; that was until another Withycombe break came from Tom Cooke who saw the incoming tackle and passed off to Danny Sansom to sprint under the posts and score his second and Withies' fourth for the bonus point.

Once again, the visitors picked up the pace and put some pressure on from the restart. After multiple phases of play, they finally broke open a gap in the Withy line to allow Flanker Jamie Moore in at Clubhouse Corner for an unconverted score.

Keen on getting a second try, Veor threw everything at the hosts at the game entered its final minutes, but this final flurry caused them to make panicked mistakes which enabled Withy to see the game out with no further changes to the score. Full time score: Withycombe 26, Veor 8. After the game, Sam Williams praised his side saying "It's Really nice to get another positive result against a team in and around us… We definitely realised that we had the better of Veor in the backs, and Danny Samson made multiple breaks today. The tries we scored were nice pieces of play and it's good to see that we have more than just the attrition that has been to the fore in the past 2 games. Overall I'm really happy that we've kept the run going, and look forward to the next games which will provide further tests as to how far we have come." Next week, the boys face a big challenge as they travel down to Penzance to face second-placed Pirates Amateurs at the Mennaye Field (2:30pm). As ever, we'd love to see you there!