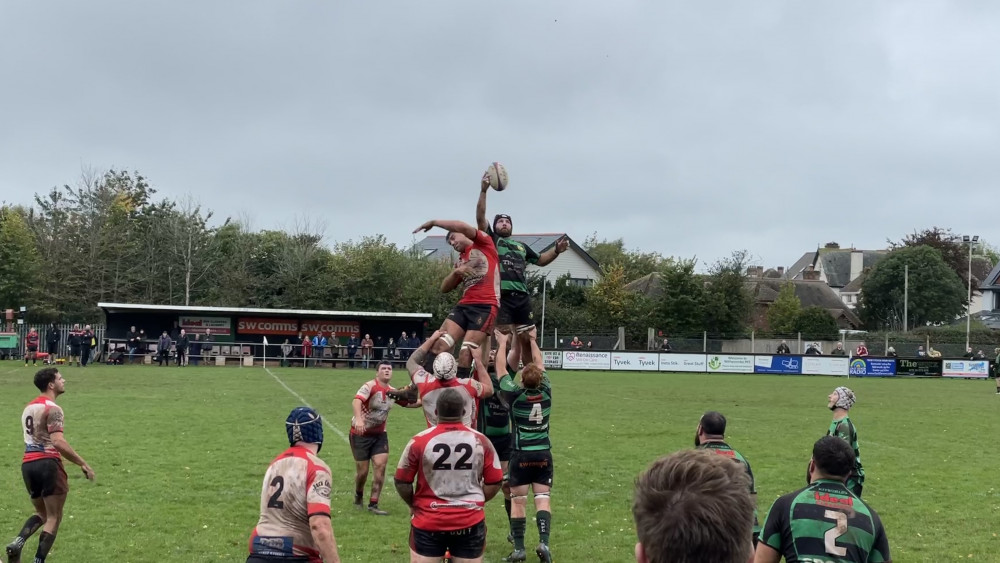 Going into today's game, our visitors had sported an impressive unbeaten run, earning maximum points in each fixture, but today – Withy wanted to upset that applecart!

Withies got us underway, heading downfield and straight away both sides showed some good intent. Tavistock enjoyed the lion's share of the early attack, but the Withy defence stood strong to deny any scoring.

Despite the strong defence, it was the visitors that opened the scoring on 13min when a loose ball from Withy was booted towards the try line; this set up a foot race between the two sides and with Tavistock launching on the ball first, they took the lead 0-7.

Withy were straight back though with some positive attacking moves and, despite a penalty attempt hitting the posts, they continued to pile on the pressure. Pressure turned to points shortly after when a driving maul was set up on the Tavistock 22' and marched the distance to the line. With the maul being collapsed under the pressure, the referee headed under the posts to award Withy the penalty try. The scores were back level and Withy were keen for more and were more than holding their own against the top-of-the-table side who were equally keen on regaining their lead. This exciting brand of rugby kept everyone on their toes and before long, it was half time with the teams changing ends level at seven points apiece.

The Moorlanders now had the slope in their favour and used it well in the opening exchanges of the second half. Once again though, Withy defence continued to work hard, with each player doing their bit to keep the visitors away from the danger zone. Slowly but surely play made its way back into the Tavi half and that's where it remained for a little while.

The points deadlock was broken as the game entered the final quarter with a superb long-range penalty from Withy's Harry Symons. A three-point lead soon became more when an equally as superb catch and drive crossed the try line from 5m out with Chris Gibbons emerging with the ball to jubilant celebrations both on the field and from the Clubhouse Corner patio.

With a points cushion protecting the boys a bit, they continued to play with increased confidence in attack and defence and dominated large parts of the final ten minutes. With little more than five minutes remaining, Withy struck again in carbon copy fashion. Another catch and drive from 5m found the try line once again, this time Max Cooke peeled off at the last moment to score to an even greater reception.

Tavistock, by this point were out of contention for the win but still wanted more points and following a string of penalties and some persistent attack, they managed a second try next to the posts well into added time. With the quickly taken conversion hitting the posts, the game was brought to a close, the final score Withycombe 22, Tavistock 12.

A huge statement from the boys today who put in a team performance to come away with the points. The tries may have come from the forwards but the whole side put in a huge shift to make sure of the win – this was made all the more evident with the Man of the Match award being shared between Full Back Lewis Vaughan and the entire back row of the scrum!!

Next weekend, the Withy boys head back on the road to the English Riviera to face Torquay Athletic in what will likely be a close 3rd vs 4th battle.