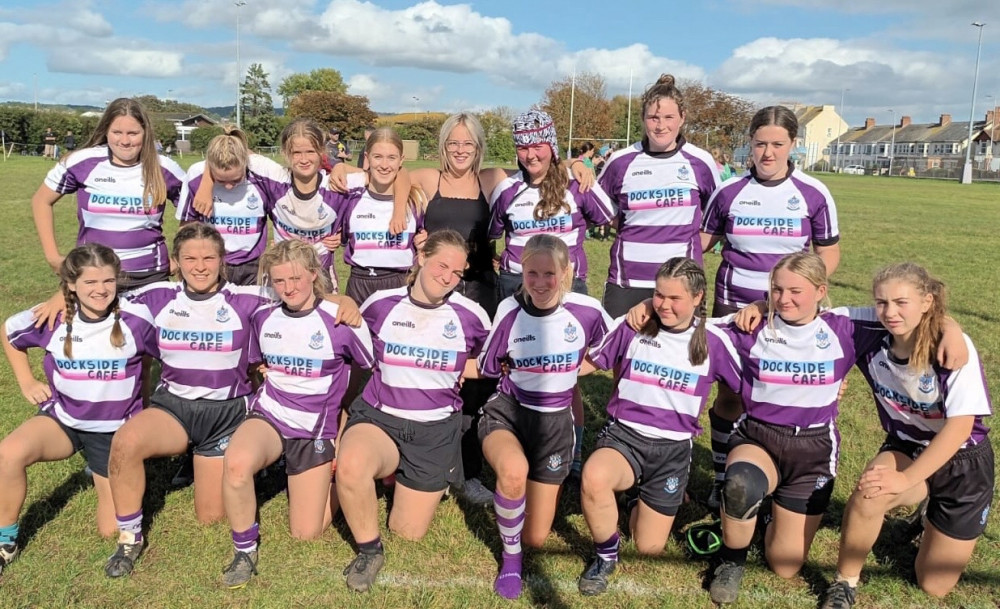 COCKLES U16 girls started their first-ever National Cup campaign with an outstanding win against a very physical North Petherton team.  The RFU National Cup Competition for this season, 64 teams across the country. Exmouth are placed in South West Pool 3 with North Petherton, Winscombe and Hornets. Some tough competition with Finals played out in April/May 2023.

It seemed COCKLES girls had last week's surprise defeat at home to Crediton in mind as they were very quick out of the blocks, returning to the type of rugby that they excel at - keeping the ball with the forwards, playing up the middle, and keeping possession.

Within the first five minutes Shayla Tynan benefitted from several phases of crunching forwards play, she was in the right place once the ball was spun wide for the first time. This first score settling the nerves of the whole team.

Within 10 minutes, Exmouth scored again - this time Marnie Wright seeing the space she needed and picking the ball from a ruck within the 5 metre line. Milly Fisher was able to bag her first points of the game with a successful conversion.

Shortly after the restart, Exmouth found themselves temporarily down to 14 after a high tackle earned the referee's scorn. This seemed to enthuse the North Petherton girls who now found themselves on the front foot for the first time in the game. Despite the numerical advantage, the Exmouth Girls dug in to defend repeated attacks - from her own 10 metre line, Bonnie Purchall was able to rip the ball from nowhere and sent a pass to Sophie Piper who was able to weave through the surprised visitors to score.

This try against the run of play seemed to spur the visitors into a better defensive performance, and whilst the home team had most of the ball, they had to work much harder to gain ground. The fourth Exmouth try followed sustained pressure on the line, again and again the visitors held out, until finally Sophie Piper found the space to score her second.

The effort to deny that try for so long must have sapped the visitor's strength, as from the restart, Rose Hooper was able to dance though them, handing off tackles on the way to the line for the 5th home score before half time.

The second half was a very different game. The rain came in and set for the afternoon, meaning the ball was very difficult to keep hold of, and North Petherton seemed to find ever more defensive power to deny the home team. Bonnie Purchall and Rianna Boere scored the 6th and 7th tries, both of these were the result of the forwards trucking the ball on through several phases, sucking in the defending players through sustained pressure.

Unfortunately, the weather made the second half much less entertaining for the spectators, but no less enjoyable for those on the pitch. Milly Fisher converted to 6th try, to bring the final score 39-0.

Next Sunday sees the girls travel to Kingsbridge to continue their Devon Cup journey - their next National Cup game is a very tricky visit to Winscombe on Sunday 20 November.